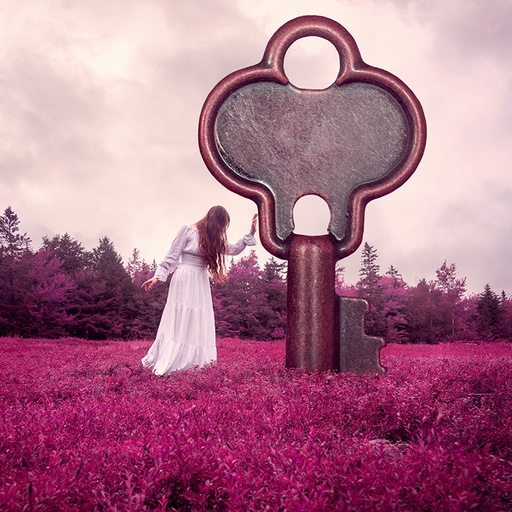 Today I'm sharing the original post I wrote to go with this image when I created it in February.

Sometimes you need to create for yourself, create just to create because the idea exists. No expectations. No standard to hold to, just freely allowing whatever will come to be what it is and flow where it will.

The other day I went through my keys to find a few for one of my Watercolor World images. While shuffling through the keys I found this one and an image flashed through my mind of a girl standing in a field, reaching out to touch the key.

We don’t know what secrets we hold, or which ones will be the key.

I knew I had some photos in a field from September when I attempted shooting The Mask Series for the first time. So I took a handful of chosen keys and went downstairs to my computer, opened the folder from September of last year, and started searching through the photos I’d taken to see if any were a good fit. I did this before shooting the key because I wanted to make sure I could get the angle and perspective right.

But then as I searched through the photos, I was newly inspired to attempt another piece for The Mask.

Which lead to shooting stock photos of both the mask, and the secret key. (This key originally had the word "secret" typed on the front.)

Sometimes the secret is just getting started.

So if you’re feeling creatively stuck, I encourage you to just step out and try, you never know where your mental leaps will lead.